ACL is the carrier with the special capabilities to handle unusual cargo: the right vessels, equipment and experienced professionals to get the job done right. Here are some memorable moves:

Atlantic Container Line transported the powerboat set to break the Round Britain World Record. This revolutionary craft set sail from Portsmouth, Virginia to Liverpool aboard ACL’s multipurpose RORO/containership, “Atlantic Compass”. The Bladerunner 51 is an ‘Air Entrapment Monohull’ powerboat pioneered by ICE Marine. The radically different twin tunnels flare out from either side of the twin stepped hull, finished with knife-like sponsons at the sides enable the 75 mph speed need to break the record. The boat weighing 11,794 kilos (26,000 lbs.), was 17.3 M (51′) long and standing 3.96 M (13′) tall, 3.96 M (13′) wide was secured onto one of ACL’s 40′ roll trailers for stowage into the RORO decks. 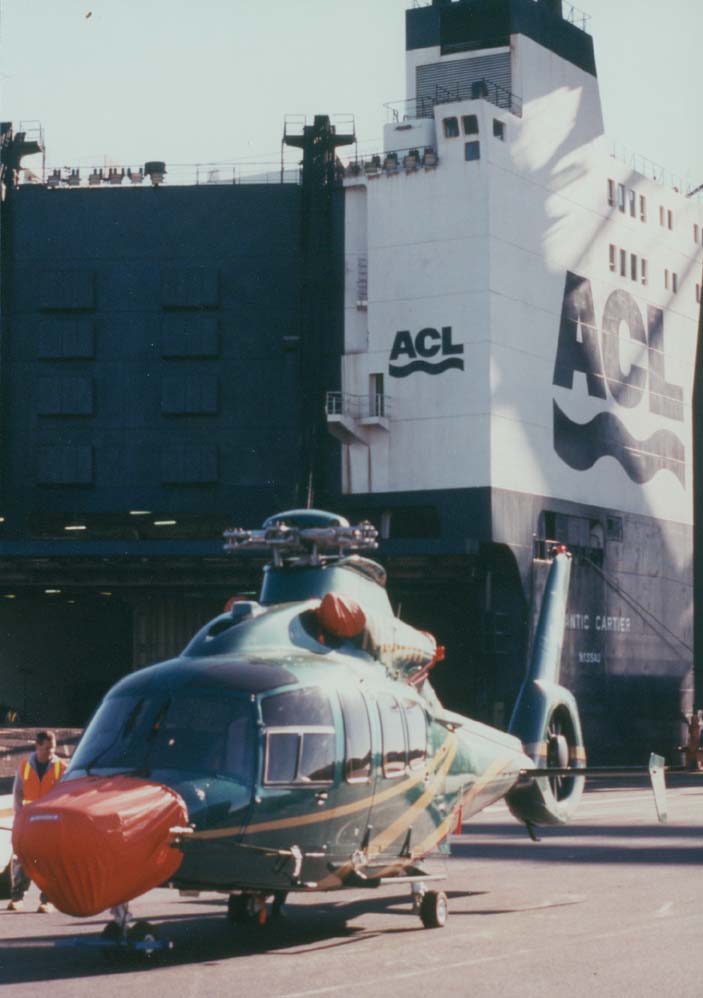 A Eurocopter EC-155B for Wayne Huizenga owner of the Miami Dolphin’s football team sailed from the United Kingdom in October 2001 via one of Atlantic Container Line’s five combination RORO/Containerships, “Atlantic Cartier”. The 12-seater helicopter is one of three operating in the United States. The EC-155B’s blade span is 41’7″ long (tip nose to end tail pylon), 11′ wide (with blades removed), height (to toptail) 14′, with an operating weight 6,000 pounds. The copter was shipped overseas for Mr. Huizenga’s recent sporting events in Europe. Once back in the United States, the U.S. Government leased the Eurocopter for demonstrations before returning it to Mr. Huizenga. Felix Huang of Helicopters International said “ACL was chosen because of its unique ability to transport the $7 million helicopter intact, safe and secure from the elements for its roundtrip transatlantic voyage without dismantling it”. With the world’s largest and most sophisticated Container/RORO ships in the world, ACL was the only combination roll-on, roll-off container carrier that had all “the creative solutions” to handle the and provide the safest transport. The helicopter was prepared for its transatlantic voyage and rolled onto the ACL vessel via its 420 metric ton stern ramp in May 2001 aboard the “ATLANTIC COMPASS”. 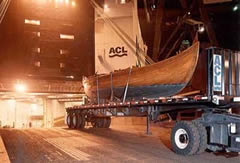 Atlantic Container Line transported the oldest seaworthy Viking ship in the world from Goteborg, Sweden to Elizabeth, New Jersey aboard its RORO/containership, “Atlantic Conveyor.” This 80 year old historical craft weighing 9,920 pounds, standing 8’3″ tall, 8′ 8″ wide was secured onto one of ACL’s 42′ flatbed trailers for stowage into the giant RORO decks of the “Atlantic Conveyor” via her 420 metric ton capacity stern ramp.

Once discharged from ACL’s RORO/containership, this antique vessel joined New York’s Hudson River festival commemorating Leif Eriksson’s journey to America approximately 1,000 years ago. Following the September celebration, ACL transported the Viking Ship back to Sweden, Aboard the “Atlantic Concert”, where it resides in the private collection of Tö by Vikingalag.

Eight LeMans racecar transporters made their transatlantic “pit stop” aboard the “Atlantic Conveyor” one of Atlantic Container Line’s combination RORO/Containerships in Halifax and Port Elizabeth. The team cars, sponsored by Cadillac, Corvette, Olive Garden, Quik/Perelli, to name a few, were driven directly onto one of the vessel’s three main RORO decks via her 420 ton capacity stern ramp. Each 55,000 pound transporter discharges n Liverpool, England were then driven to France for the May 2000 “24 Hour De LeMans.” All teams placed very competitively, including one headed by Mario Andretti.

Following the French race, the teams again turned to ACL to return the transporters back to North America, discharging in various North American ports for their next challenge at the Sears Points Raceway in California in late July. 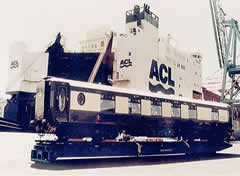 All Aboard as ACL’s Transports Orient Express

Atlantic Container Line transported the Orient Express antique Pullman Dining Carriage from Liverpool, England to Elizabeth, New Jersey aboard its RORO/containership, ATLANTIC CONCERT. The train car, weighing 43 tons, standing 13 feet tall, 70 feet long and 9 feet wide was driven directly into one of the three main RORO decks of the vessel via her 420 metric ton capacity stern ramp. Upon arrival at Port Elizabeth, the deluxe tourist carriage was quickly discharged and transported by special truck to Manhattan’s Wall Street, as part of the festivities for the New York Stock Exchange party marking the Orient-Express Hotels Ltd. Independent Public Offering, in late July. Following the successful IPO event, ACL transported the Pullman back to England, where it operates as part of the Orient-Express travel company’s luxury train fleet.